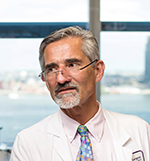 Thomas Wisniewski, MD, is Professor of Neurology, Pathology and Psychiatry at New York University School of Medicine (NYUSM). He is also the Director of the NYUSM Alzheimer’s Disease Center, the Conformational Disorders Laboratory, the Center for Cognitive Neurology, the Barlow Memory Disorders Center, and the Division of Aging and Dementia. His group helped develop novel therapeutic approaches to Alzheimer’s disease (AD), in particular, immunotherapeutic approaches. His laboratory developed both active and passive immunizations, specifically targeting abnormal oligomeric protein conformation, as well as a means to stimulate innate immunity to ameliorate AD pathology. Recently, he developed an unbiased proteomic methodology that produces robust data utilizing archival formalin, fixed paraffin-embedded human tissue, and used this method to perform the most extensive proteomic analysis of amyloid plaques. In addition, Dr. Wisniewski was the first to hypothesize that apolipoprotein (apo) E plays a critical role in AD pathogenesis, coining the term “pathological chaperone” for the role of apoE in AD. More recently, his laboratory developed a novel therapeutic approach based on blocking the interactions between apoE and amyloid β, showing it to be effective in multiple AD models. This work has led to more than 300 peer-reviewed publications and over 25 issued patents.