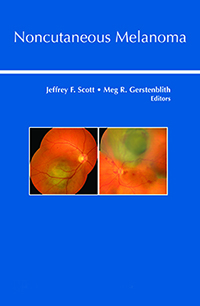 Mucosal nasopharyngeal melanoma is a rare head and neck melanoma. Prognosis is poor (5-year overall survival rate of 10–30%) with high rates of metastases and local recurrence. Head and neck mucosal melanoma represents 0.8–3.7% of all melanomas and 0.03% of all neoplasms; the most commonly involved sites are the nose, paranasal sinuses, oral cavity, pharynx, and larynx. A slight female predominance has been described and the median age of presentation is 64.3. Irritants and carcinogenic substances, such as tobacco smoke and formaldehyde, seem to be related to its development. A lack of specific clinical features often leads to a late diagnosis. At an early stage, clinical features can include epistaxis, obstruction, difficulty breathing, serous otitis media, and nasal discharge; subsequently, pain, facial distortion, proptosis, and diplopia predominate the clinical pictures. Masses are mostly polyploid, friable, and bloody. They can be amelanotic or surrounded by black- or brown-pigmented dots. Nasopharyngeal melanoma resembles other common polypoid lesions; therefore, histology plays a pivotal role in confirming the diagnosis. Computed tomography, facial and total body scan, as well as magnetic resonance imaging are mandatory for a correct staging. Surgical treatment remains the gold standard. External or intranasal incision depends on tumor site and size. Sentinel lymph node biopsy is not usually performed. Neck dissection is indicated in cases of clinical and/or radiological positivity. Radiotherapy is mostly palliative, as radiotherapy lacks efficacy for mucosal melanomas. The effectiveness of target therapy and/or immuno¬therapy is undergoing evaluation.